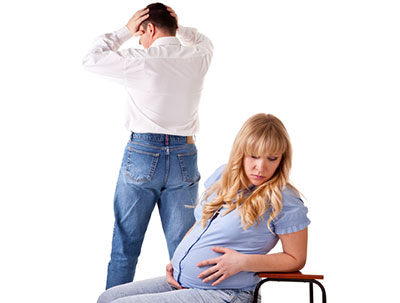 In juridical practice, there are cases when the spouses want to dissolve the matrimonial relationship, but the wife’s pregnancy is an impediment for such solution. Of course, modern life is full of surprises, and divorce in Ukraine is no longer unusual. Quite often, married women wonder how to divorce the husband in case of pregnancy?

From the standpoint of a common person (by the way, many lawyers also maintain this position), there are no obstacles to the termination of relationship during pregnancy. You may get divorced at any time, but your current husband will be recorded as the father of your child.
By the order of the Court under Article 109 of the Family Code of Ukraine, divorce is permissible by joint request of the spouses that have children (incidental proceedings), and according to the Article 110 of the Family Code of Ukraine, when the claim is filled by one of the spouses (legal proceedings).

In the second case, the sue for divorce can’t be submitted during the wife’s pregnancy and for one year after the birth of the child, except the following cases:

Under article 109 of the Family Code of Ukraine, a marriage may be dissolved by a joint request of spouses during the wife’s pregnancy and for one year after the birth of the child.

If the divorce during pregnancy or until the child reaches one year is impossible (there are no grounds described above), the parent with whom the child lives still right to alimony for the maintenance of child and his/her mother until he/she reaches the age of three.
Family Code contains an express prohibition on divorcing the wife, if she is pregnant. Of course, there are instances where it is possible to get divorced during pregnancy. There are reasons why the wife can’t divorce her husband just at her own will, for example: I want to divorce my husband. Quick divorce in court is possible if:

How to divorce the pregnant wife, if she is carrying someone else’s baby?

By law, the former spouse of the women is recognized as a father of the child who was born not later than on the 300 day after the divorce, unless other information is provided.

The husband can ask for a divorce, if his wife is pregnant with another man’s child (if the real father acknowledges this fact). Otherwise, he will be denied. It’s the only precedent in which divorce during pregnancy can be made on the husband’s initiative.

After the child’s birth, the husband will have to file a paternity suit. If the genetic examination will confirm his words, the judge will approve the divorce. After that, your ex-husband will be exempted from the maintenance duty.

So, divorce during pregnancy is possible only at the woman’s request. The man can insist on divorce only if he is not the father of the future child, and this fast has been proven.

In juridical practice, there are cases when the spouses want to dissolve the matrimonial relationship, but the wife’s pregnancy is an impediment for such solution. Of course, modern life is full of ...

In juridical practice, there are cases when the spouses want to dissolve the matrimonial relationship, but the wife’s pregnancy is an impediment for such solution. Of course, modern life is full of ...